Looking beyond the headline. 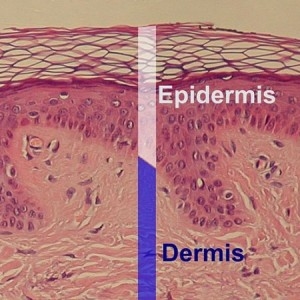 If you have skin lesions or marks that you’re concerned about, then your doctor will probably recommend a dermoscopy. This means they’ll perform an easy visual scan of your skin using an instrument called a dermatoscope. This exam can pick up superficial Basal Cell Carcinomas (BCC), which may be treated with skin cancer cream. However, if your doctor suspects skin cancer, then you will need to have a skin biopsy and get a skin cancer pathology report. This will help identify deeper problems and help your doctor find the best course of treatment.

If your doctor recommends this course, then here are some of the common terms in skin pathology reports and what they mean.

In order to understand your skin cancer pathology report, you need to know a little more about human skin. Your skin is quite complex. It replaces itself entirely every 4-6 weeks and consists of several layers.

The 5 layers of the epidermis, from top to bottom, are:

This is the uppermost layer of the Epidermis and consists of dead keratinocytes. In this layer, the cells are filled with keratin, the same tough protein that makes up your hair and nails. The stratum corneum acts as a protective barrier.

A thin layer of dead skin cells helps the skin stretch and resist friction damage, particularly around the soles of your feet and palms.

The middle layer of the epidermis, consisting of flat Keratinocytes that have no nuclei or centre. When doctors measure melanomas to see how far they’ve penetrated, known as the Breslow thickness, these measurements start from The Stratum Granulosum.

A layer of spiny cells that gives your skin its strength.

The deepest part of the epidermis where cells (keratinocytes) replicate and begin their journey upwards. This layer also contains melanocytes, the cells that produce melanin to determine skin colour.

When skin cells, Keratinocytes, are abnormal, it’s a sign of cancerous or pre-cancerous conditions such as Solar Keratosis, Intraepithelial Carcinoma & Squamous Cell Carcinoma. There are also several other parts of the human epidermis that may be included in your skin pathology report.

Rete Ridges are downward projections of the epidermis into the dermis, the second layer of skin.

Merkel Cells are found in groups in the Basal Layer of the epidermis. They connect to nerves from the dermis and help transmit the sensation of touch.  Very occasionally, they can develop into Merkel Cell Cancer.

Langerhans Cells are found mainly in the epidermis and the upper part of the dermis. They participate in immune function by detecting foreign cells such as bacteria and other antigens. 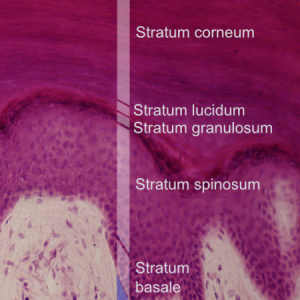 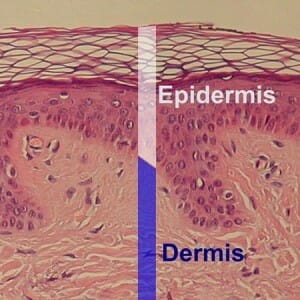 The Dermis is the thickest part of your skin, and it’s found underneath your epidermis, so you can’t see it unless you’re wounded. The dermis is divided into two sections:

While it’s always tough and flexible, the dermis is thicker on different parts of your body. For example, on your back, it’s around  7-8mm thick, but on your eyebrows, it’s around 1mm thick.

The dermis also extends up into the epidermis in finger-like protrusions called Dermal Papillae. These help keep the dermis and epidermis together and also contain superficial dermal blood vessels to help nourish the epidermis.

When you have a skin biopsy, your doctor will always take a sample of the epidermis and often part of the dermis as well. There are two main reasons for this.

Firstly, it’s very hard to take a sample of the epidermis alone. It’s incredibly thin and varies from person to person and body part to body part. So, trying to take a shallow sample like this is nearly impossible.

Secondly, and more importantly, the dermis makes up the bulk of the skin. This is where your doctor needs to look for deeper skin cancers.

Superficial biopsies of the skin can miss these deeper cancers or result in the cancer not being staged correctly. And this could result in an incomplete skin cancer pathology report and be very dangerous for your long-term recovery.

Melanin causes the pigment or colour in your skin.

When cells like keratinocytes and melanocytes have more melanin, it causes:

When melanophages in the dermis take in melanin, it results in skin spots like Lichen planus like keratosis (LPLK) – which look like flat pink or grey lesions.

Naevi (moles) & melanoma are two types of skin spots that contain high numbers of melanocytes, which explains their dark appearance.

Some other Terms used in skin cancer pathology reports

©South East Skin Clinic, All rights reserved A Guide To The Atypical Mole
Scroll to top