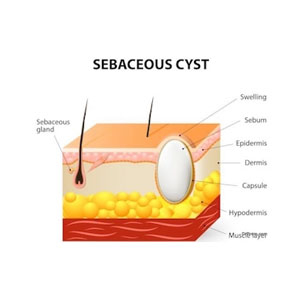 What is a Sebaceous Cyst?

The term “sebaceous cyst” refers to a non-cancerous cyst of the skin.  There are two types of sebaceous cyst: Epidermal cyst that originates from the upper layer of skin (epidermis), and Pilar cyst that originates from hair follicles. It’s mainly pathologists that worry about these differences. In practice, they both appear very similar – as a firm skin coloured lump.

A Sebaceous cysts forms out of your sebaceous gland. This gland produces the oil, called sebum, that coats your hair and skin.  The sebum is the same consistency as toothpaste, yellowish in colour, and doesn’t smell very nice!

Cysts can develop if the gland or its duct becomes damaged or blocked. This generally occurs due to a trauma to the area.

The trauma could be a scratch, a surgical wound, or a skin condition, such as acne. Sebaceous cysts grow slowly, so it could be weeks or months after a trauma before you notice the cyst.

Other causes of a sebaceous cyst may include a deformed duct or an underlying genetic condition such as Gardner Syndrome or Basal Cell nevus syndrome.

Sebaceous cysts are twice as common in men as women.

They tend to present in early adulthood to middle age although they can be present at birth.

Please note that we do not specialise in Sebaceous Cyst removal.

This information is provided for informational purposes only. Please see your GP to recommend a doctor to remove a cyst.

What are the clinical features?

How do I know it’s a sebaceous cyst?

The cyst can be described as a firm skin-coloured lump which almost feels as though it is just “underneath” the skin and you’ll be able to move the lump around.

There may be a tiny central plug at the top of the cyst. This punctum represents the follicle from which the cyst developed.

A sebaceous cyst is usually found on the scalp, face neck or back.

The main alternative diagnosis to a sebaceous cyst is a lipoma. A lipoma is a benign fatty growth. The lipoma is usually softer and a little deeper than a cyst. The surface of a large lipoma may feel a little lumpy because the benign tumour consists of lumps of fat.

What is the significance?

What happens if a cyst becomes inflamed?

It is very difficult to distinguish between a ruptured cyst and an infected cyst. The cyst is usually tender, red and discharging.

The inflammation caused by either a rupture or infection may break down the cyst wall to the extent that the cyst does not reoccur.

More commonly, though, the cyst will come back. A cyst that has been previously inflamed will be scarred and be more difficult to remove in which case the minimally invasive technique of removal is not a possibility.

The decision to get one removed is an individual decision for the person to make. These are the sorts of things to take into account:

There are some small risks involved with excision:

Please note that South East Skin Clinic does not specialise in Sebaceous cyst removal. This information is provided for general information.